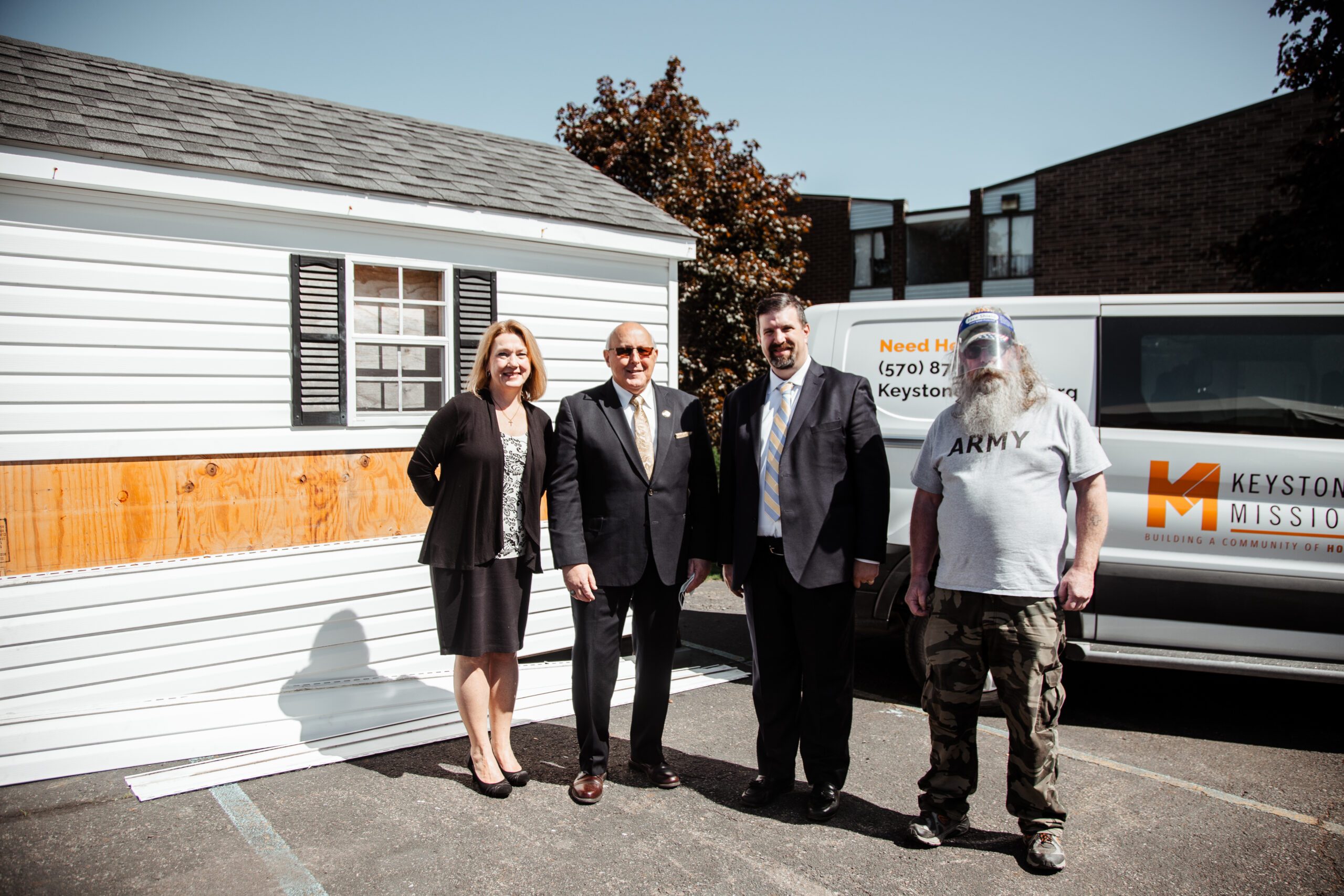 WILKES-BARRE — The house Justin Behrens wants to build would have had room for Billy Harrington and 14 other men just like him.

Homeless and penniless on Public Square, Harrington had no where to go and no one to call for help, when he literally saw the light.

The glow from a door of a downtown church attracted Harrington, who walked in and connected with someone from Keystone Mission. The meeting pulled him from the brink of suicide and set him on a life-changing path.

“This place did save my life. Because the day I walked into the Church on the Square, I was ready to walk in front of a bus. I had reached that point in my life to where I had nothing left,” the U.S. Army veteran confided Thursday.

Eight years later, Harrington, 58, delivered his testimony at the groundbreaking ceremony for the 15-bed men’s transformation center Keystone Mission, plans to build next to its existing building on Parkview Circle in Wilkes-Barre.

“I’m living proof that life transformation is possible,” Harrington told the crowd of approximately 50 invited guests. “My name is Billy and I am Keystone Mission.”

Harrington’s long grey-bearded visage is the face of the faith-based charitable organization, appearing on its television commercial

Behrens, CEO and Executive Director of Keystone Mission, attested Harrington was representative of the homeless men the center will serve.

The two-story addition will cost approximately $400,000 to build and will be funded by private donations in order to avoid the restrictions that come with federal aid. Although Behrens would like to see it start as soon as possible, it will likely be ready by January due to the delay in getting lumber and building materials as a result of the supply chain issues from the ongoing novel coronavirus pandemic.

Apart from the physical construction, Keystone Mission will build lasting relationships with the men who pass through the center’s doors, Behrens said. The personal connection is critical to guaranteeing an individual does not return to the streets or substance use.

When the friend he was staying with lost their apartment after being hospitalized, the landlord referred Harrington to a homeless shelter. He exceeded his stay and ended up on Public Square.

“At the time, the only friend I had lived in North Carolina. When I found myself ready to be on the streets, I didn’t know anybody in Wilkes-Barre,” Harrington said.

Equally important, Behrens added, is the ability to support oneself and the center aims to provide life skills, self care, biblical training, job readiness and job skills.

The men who live at the center will be able to partner and work with contractors to renovate buildings into apartments, Behrens explained.

“We’re then going to give them that apartment to live in for the rest of their lives at a reasonable price. So now they have affordable housing with a good house, with a good job and, most of all, they’re going to have relationships with the mentors that they had that were built through this program,” Behrens said.

The center will focus on men because of the large number of homeless men in the area, Behrens said. Rather than duplicate services, Keystone Mission will work with mental health and drug and alcohol counselors, CareerLink for resumes and job skills, health care providers and assist the men with obtaining Social Security cards, birth certificates and drivers licenses.

Wilkes-Barre Mayor George Brown supported the center staying in the city and recalled he expressed his disappointment in not being able to help Behrens find a building for the center.

“As long as I’m mayor you have my support. Anything I can do to help you, the resources that the city has are at your disposal,” Brown said.

With an apartment and a job at Keystone Mission through the Luzerne County Mature Workers Program, Harrington said he’s staying put. He’s even considering completing the online course to get a degree in information technology. He discontinued it because it became too expensive.

“I’m originally from California and Nevada,” Harrington said. “I’ve thought about (going back), but then I looked at it this way, there’s nothing there for me.”

Sorry, the comment form is closed at this time.

Worthy of your Trust.

Your Funds at Work
Program Funding 80%

Held to a Higher Standard.

We use cookies on our website to give you the most relevant experience by remembering your preferences and repeat visits. By clicking “Accept”, you consent to the use of ALL the cookies.
Cookie settingsACCEPT
Manage consent

This website uses cookies to improve your experience while you navigate through the website. Out of these, the cookies that are categorized as necessary are stored on your browser as they are essential for the working of basic functionalities of the website. We also use third-party cookies that help us analyze and understand how you use this website. These cookies will be stored in your browser only with your consent. You also have the option to opt-out of these cookies. But opting out of some of these cookies may affect your browsing experience.
Necessary Always Enabled

Performance cookies are used to understand and analyze the key performance indexes of the website which helps in delivering a better user experience for the visitors.

Analytical cookies are used to understand how visitors interact with the website. These cookies help provide information on metrics the number of visitors, bounce rate, traffic source, etc.

Advertisement cookies are used to provide visitors with relevant ads and marketing campaigns. These cookies track visitors across websites and collect information to provide customized ads.

Other uncategorized cookies are those that are being analyzed and have not been classified into a category as yet.